My deluxe double airbed was delivered earlier than expected (how generous I am to my future guests) and so I decided to take a sneaky afternoon off and go to Hampstead Heath. I’ve been spending a lot of time researching companies and generally thinking about my career and it’s important to stop from time to time and enjoy just being in London. Today was one of those days.

Hampstead Heath is only a ten minute bus ride away and the weather played along nicely. I am appreciating that it’s not always like this and it has been spectacular this week, so I packed an apple and some water, prised myself off my roof terrace where I may have actually got a bit sunburned and headed off on the 168. It seemed like an excellent way to explore a little more of London.

At the end of the line is Hampstead, a pretty little village high street leading up to the heath. I walked from the bus stop past the station and followed the trees around. The heath itself is 790 acres of open parkland right on the edge of London. There are ponds, trees, overgrown paths, a stately home and lots of wide open space; it’s stunning. Despite it being a weekday there were joggers, dog walkers, mums with babies, lots of old people and, not including myself in the last category, me. One of the things that’s great is that as soon as the weather is nice here, everyone is outdoors enjoying it while it lasts.

From Kite Hill you can see all of London. It was still a little misty but I appreciated the view as apparently I can’t see enough of the London skyline. Heading further, I discovered Kenwood House and recognised (at the risk of sounding obsessed) another location from “Notting Hill.” No sign of Hugh Grant but c’est la vie, things haven’t been quite the same since he had his love child. I must go back to Kenwood House though, with or without Hugh Grant, as there was a lovely cafe and the house is free and open to the public.

I was interested (and amused) to discover a ladies only bathing pool. Apparently people swim in the ponds on the heath (apart from the ones where dogs go) and while no one was braving the March water, I can imagine that if it’s particularly warm in the summer, it might be fun to go and have a picnic and a dip.

Walking back I sat down at the edge of one of the pools and heard a familiar sound. In Venice I had a flock of very raucous green parrots which lived in the palm tree across the road. They would fly from the palm tree across my deck to the power line beyond where they would sit and noisily abuse the crows. Sure enough, I looked up and there was a bloody green parrot. It must have followed me. Who knew Hampstead Heath was tropical. All I need now is the angry squirrel knocking on my french door demanding nuts and I will have managed to replicate my life in Venice.

Heading back to the bus stop I made the mistake of going into Marks & Spencer Simply Food. Simply incredible more like as the range of food is astounding. I may have to start doing an evening run as well at this rate as I may have indulged in something simply delicious! 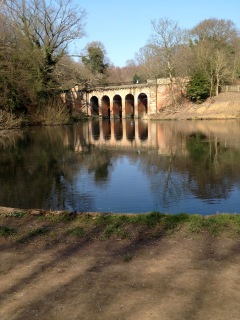