I have officially finished work for the year and I have survived the past ten days in the Mansion with the Most (potential, expenses, opportunity, cats etc) and I am ready to have a rest and enjoy some well deserved time off…

Oh what am I thinking?

This is when it all begins. From wallpaper stripping , uncovering windows, dealing with rot and determining whether the building will collapse if we knock down the maid’s room.

All I can say now is, let the festivities begin!

I suspect I’ll be glad to get back to work on January 7th!

We are now able to walk to Hyde Park, ok it took half an hour but still definitely walkable.

And what a stunning morning with blue skies, sunshine and frosty leaves.

We don’t know Hyde Park well so Agnes and I did a big walk around the Serpentine where we saw lots of hissing swans, up to Kensington Palace to see if we could see Meghan peering around the curtains and then back past two hundred sausage dogs in Christmas jumpers and there really were two hundred!

With all that ticked off the list as well as horses (one of us went berserk) it was a three hour walk and we were ready for a sit down. 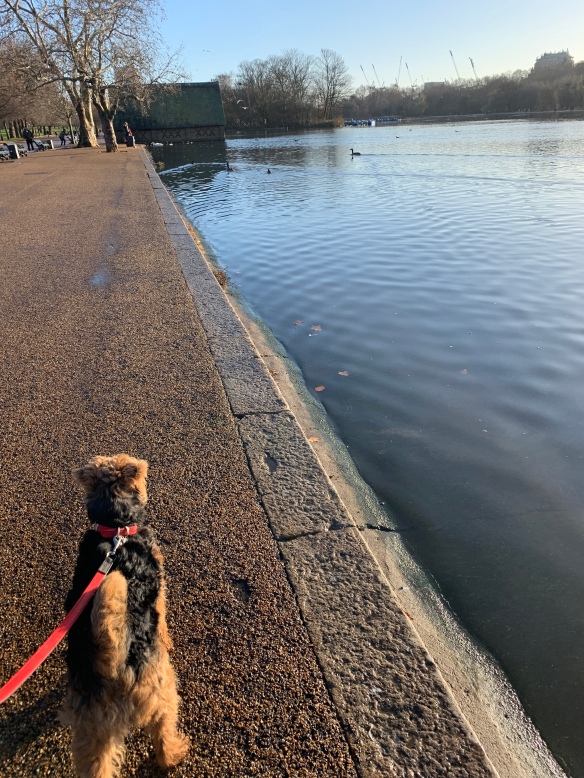 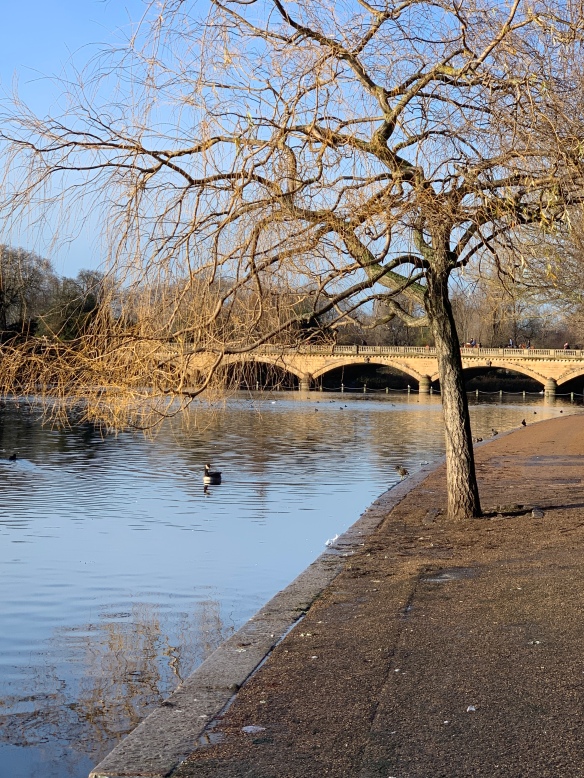 This morning Agnes and I tried out a new cafe/bar/eatery, The Elgin.

Just around the corner, it was dog friendly, had good food and had rather similar floorboards!

This is very good news as I was missing our old cafes in Queen’s Park and their poached eggs were excellent! 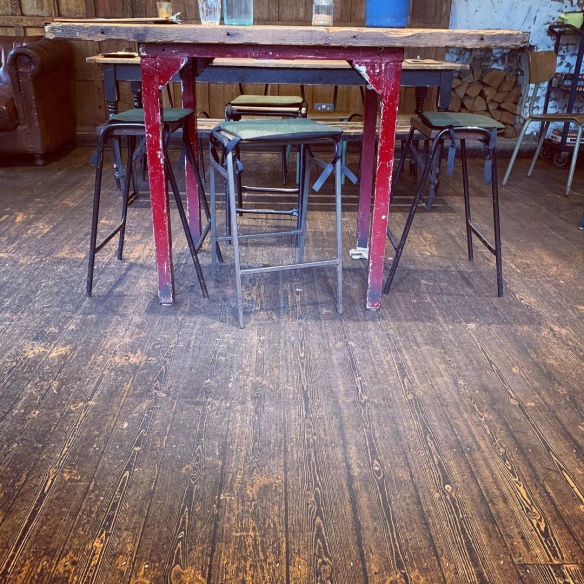 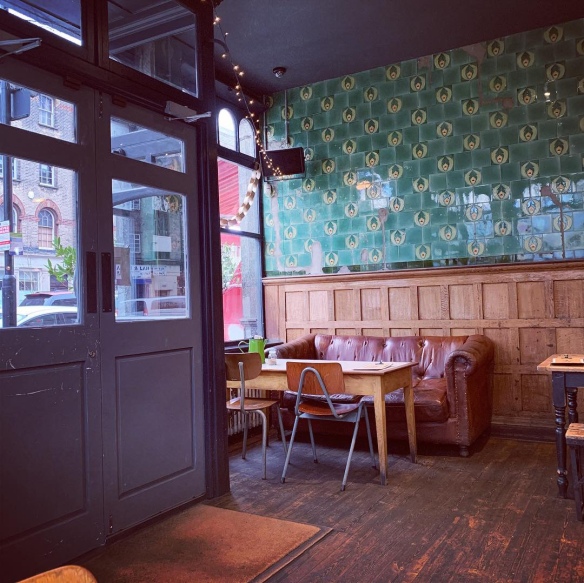 It’s as if we’ve gone back in time and it’s 1945. Tonight I taped black bin bags over the front door to keep the light out (as opposed to in).

Light has been pouring in through the front door every night as there’s an all night security light and it’s been driving me crazy. I’m light sensitive and I can’t sleep.

I’m optimistic that this is the temporary solution with a black out blind being a more permanent option.

It’s not very stylish but very effective as I woke up at 7:30am!

It’s hard to believe it’s only a week since the most traumatic move ever. It hasn’t been the easiest of weeks as I’ve been camping in one room, going to work, dealing with Agnes and generally feeling a bit overwhelmed.

I decided to work from home on Friday having skipped the Christmas party last night but knowing very little would get done today.

Instead I decided to have a look under the carpet and as these things happen, before I knew it, I’d ripped out the carpet of cremation in the bedroom and hall. It had been getting me down especially the smell and instantly things felt better.

Having said that, the hall is quite rotten and will need boards and joists replacing but we’ve dealt with that before so it’s scary but not daunting.

And then I settled down to wait for a few essentials to be delivered including a mini fridge so we can function somewhat normally while we’re kitchen-free. 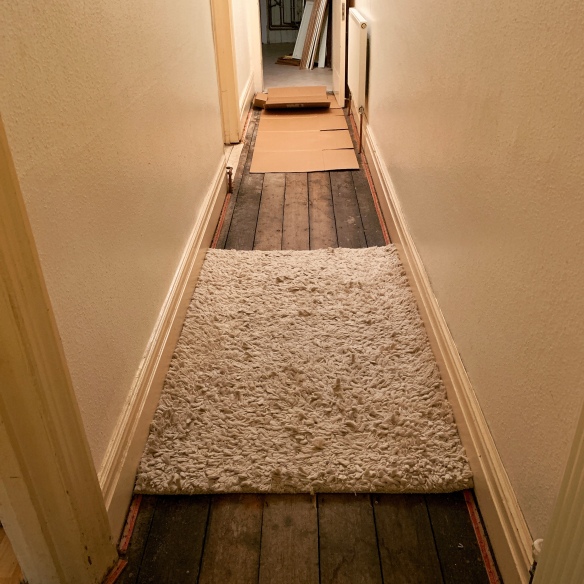 Now that’s a great name for a pub… except that it’s what I found in the kitchen this morning. (I should never have bought light bulbs!)

A large brown slug was curled up in the dog bowl. It seemed to have done a few laps on the brown carpet in the kitchen bedroom and then went for supper and a lie-down.

I am, of course, terrified of slugs so am hoping it didn’t bring friends. That one was carefully dislodged into a bin bag and removed from the flat. Not a good start.

And then I found a rosary hanging on a wall in the kitchen which I’ve stood by for four days and never noticed.

I’m not a big fan of organised religion so felt slightly uncomfortable. I’m not sure what the removal process is, do I need to drop it off at a nearby church marked, please return to previous owner?

Our next door neighbours left a plant and a welcome card on our mat. What a lovely surprise.

And what a contrast from Mr. Chips who threw chips all over the floor and came in drunk every night slamming the door and stomping loudly upstairs usually falling over on the way

I must say I’m not missing the old inconsiderate neighbours and elephants upstairs.

Three days later and we’re starting to get used to things. I’ve showered in the handicapped bathroom in the dark a couple of times and it’s not that bad.

I’ve replaced light bulbs which perhaps wasn’t a good idea as now I can see things I couldn’t see before.

Agnes and I are adjusting to not being able to use the garden.

We’re cooking on the single hot plate and have been eating quite well.

And the smell, well that’s still a challenge but hopefully once we get the carpets out, things will improve. I’m trying to resist the temptation as I’m not sure what’s lurking underneath!

In two days I have met and spoken to more people in Maida Vale than four years in the dodgy end of Queen’s Park. Perhaps I’ve finally found my neighbourhood and my kind of people!

From the neighbour to the park, everyone has been extremely friendly including a new Welsh Terrier owner. We always like other Welsh Terriers!

That’s a very positive thing so after a couple of days of hard graft, Agnes and I went to the Prince Alfred for a very well deserved lunch.

We are locals after all!

It was a rough old start with a sleepless night, possible fleas and generally all a bit shit.

We gave up at 6am and went out into the dark, cold morning to walk around the park. Agnes has lost her private garden and dogs are,strictly forbidden in the communal garden so all housetraining seems to have gone out of the window, or on the carpet.

By 9am we’d had a coffee and we were off to the hardware shop to buy five litres of bleach, rubber gloves, drain unblocker, flea bombs and some moth hangers just in case.

I started by vacuuming the Carpet of Cremation and while it will not rise from the ashes, it looked a little less horrific, maybe. That took several hours and almost broke the vacuum.

I met a local builder who was working on a house near our last place. How lucky (or contrived) was that? Still, we’ll be needing a local builder so that’s a good place to start.

The internet chaps arrived to connect us to the future and we’re now fibre optic. That was worth moving for (hopefully).

I met the next door neighbour who welcomed us to the Mansions and said they were excited for us to breathe new life into this poor relic. Probably sick of the smell but much nicer than our last lot.

I had a late lunch, food is proving challenging round here and I’m really missing our local shops in Queens Park.

And then having cleaned everything else, I donned the extra long Marigolds and my cycling mask and braved the handicapped bathroom.

It turned out the drain was full of kitty litter, a first for me and it took me a moment to understand while there was s drain full of gravel. It was actually better than pulling out hair which does make me gag.

I bleached and scrubbed on my knees in the dark as the bloody LED lights kept overheating and going out and then I discovered, oh horror, we have an electric shower, the power shower complete with switch in the middle of the wall outside. That’s not staying!

The bathroom is set up as a large wet room so the whole thing needed scrubbing and mopping. The strange Japanese toilet was cleaned and the accessories of golden fish including taps, all cleaned.

Things are certainly smelling better but I think there’s another clean due before I’m willing to take my clothes off. I wish I could remember where I packed my flip flops as I could pretend I was at the swimming baths.

So that’s the day so far.

all about gem
Blog at WordPress.com.