Cycling home on a warm July evening I spotted a spiky green ball on the side of the road, the first fallen conker.

It’s early but it’s a sign that before too long we’ll be heading into Autumn. A few more weeks of summer and before we know it, we’ll be getting out the jumpers again, hard to imagine when London’s been gripped by a heatwave but this is England, seasons will inevitably change, but before that, we’re off to Turkey!

On Friday we decided to drive to the beaches of North Devon hoping to swim if the water was warm enough (I am a fair weather swimmer!)

We borrowed a car with a number plate which read as ACID and set off on the acid trip. With three responsible adults and two teenagers what could possibly go wrong!

I would say it turned out to be one of the most fun days of driving and laughing ever with new inventions of I Spy Charades and the sharing of the various uses of buckets.

With the exception of one small incident where a stone wall jumped out into the middle of the road and scratched the car, (it was the acid trip after all) it was a brilliant day out and I will get the car repaired. Oops.

Sadly the water was too cold for me but the hardy teens ran and dived in the surf apparently immune to sub zero temperatures.

After a small girl was attacked seagulls who stole her ice cream, we set off home to join the village in the pub to continue the three day party!

From a birthday party to a wedding party, it certainly was a week of celebration!

And it was a celebration indeed. From a spontaneous family hen do on Wednesday evening where we reminisced and laughed, to an intimate family ceremony in the most picturesque winery, a wedding dinner with delicious food and finally (the following evening) a gathering in the pub for what seemed like the entire village!

We’d done everything except parade the happy couple around the village on the back of a donkey (and it was discussed!)

And with the best of plans came the best of weather. We avoided the searing heatwave in London on the hottest day in the history of the universe where I’m sure the entire city melted and instead sat under an open marquee with cooling breezes wafting through.

All in all, it couldn’t have been a better start to married life for these two chaps… 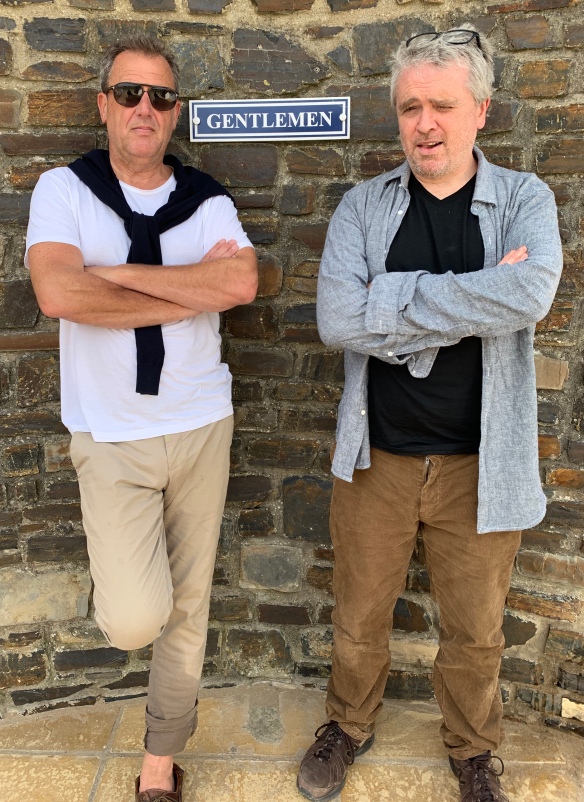 Just kidding, this lovely couple and their now official siblings.

Climate change is real as we’re melting in London.

Temperatures are in the thirties with a high of 38C forecast for tomorrow, it’s become Australia!

France has reached new highs of 44C so it seems things are just getting hotter and hotter.

It doesn’t bode well for the future.

I have been spending money like a fiend this week as I’ve started ordering the bathroom fittings.

This is extremely exciting as the power shower is packing up and randomly switches itself off just when you’re at your soapiest.

Part of the fun has been choosing tiles. My initial reaction (to having lived in filth for seven months) is to go as clean and white as possible.

A cement-like porcelain caught my eye with a herringbone feature wall. Fancy! 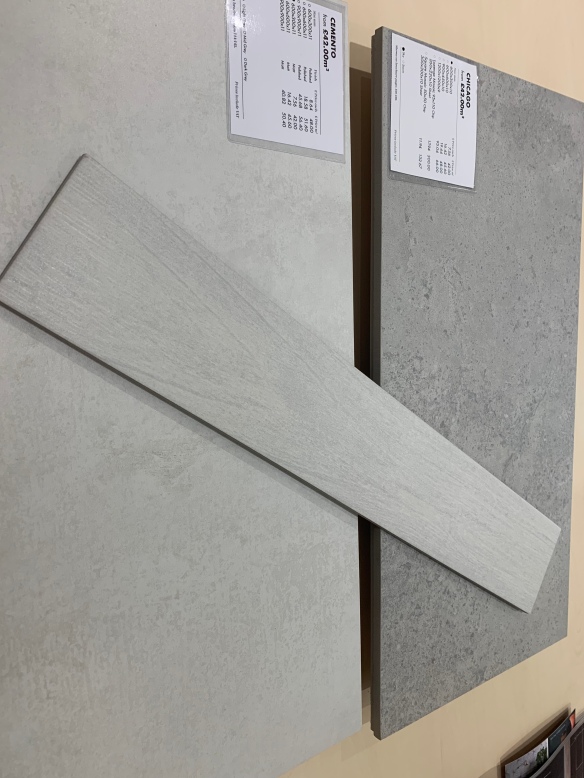 But all that was before we realised we had a toilet in a shower according to the plan.

With an architect in the house, it seemed like we had some design flaws which needed to be addressed in haste. A new bathroom plan was discussed, sketched, debated and agreed upon.

Fittings were delivered and immediately returned and we all agreed the tiles (changed) were the chicken dinner.

I find the kitchen and bathroom very stressful as it’s such a huge commitment. It means sleepless nights, circulation diagrams, function, design and storage.

I can only hope we get it right…

It was a weekend of fun and games with birthdays and get-togethers.

From a ten hour karaoke session to celebrate the birthday of Big T’s sister to a lunch in Croydon with the usual suspects, we certainly packed it in.

Combined with the power shower packing up, it was all go! 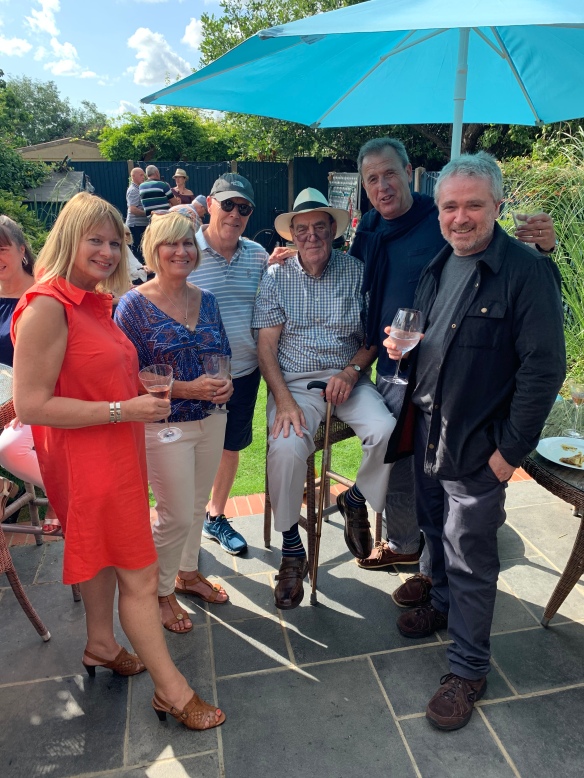 It ended with a restorative stroll through the allotment meadow and an early night as festivities as set to continue all week!

In France, just outside the front door of the studio there is an old honeysuckle vine.

There is one small twig hanging over the door which is bare of leaves where, each evening, it is clustered with bees gathering to sleep for the evening. It’s fascinating to watch them jostle for space buzzing and then settle and all is quiet. In the morning, they’re gone.

My theory is that they’re camping for the night as it’s too far to fly back to their hive and the lure of the lavender is too hard to resist.

I will have to research the mystery of the camping bees.

I have recently discovered there’s an app for black cabs in London.

I’m seriously late to the party but what bliss yesterday as I was busy buying a radiator cover (in July) and couldn’t possibly have dragged an enormous heavy box home on the bus.

How civilised to request a taxi from my phone and have a nice chap load and unload me and my purchase door to door. I’m converted!

I can only hope that as an old(er) lady I can afford to travel by taxi.

Another cleaning session in France and the house was ready for guests. Everything was finished, cleaned out, cleared, stashed, stored and emptied. The house looked lovely, the garden was spectacular and not a leaf to be seen in the pool. It was a lot of work!

We decamped to the studio for the rest of the weekend where we celebrated both Bastille Day and our sixth (London) wedding anniversary at the local bistro in Le Rouret.

We stopped on the way home to listen to a band in the Le Rouret square playing ’80s music to a rockabilly rhythm in English. It was an odd combination which seemed to confuse some of the dancers. Very French!

On Sunday we decamped to the river in nearby Villeneuve Loubet where we claimed a pebbly island in the shade. Silver birch trees dappled the light and the water was very cool and refreshing. It was certainly better than listening to people in our pool but we were eventually invaded by a noisy family so decided it was time to head home.

And then it was back to the airport with a few busy weeks ahead as we now reach peak season with birthdays, weddings, airbnb bookings, house renovations and it all culminating in a trip around the Turkish islands on a boat.

The third room is done, well, done enough for now.

This is how it looked in January… 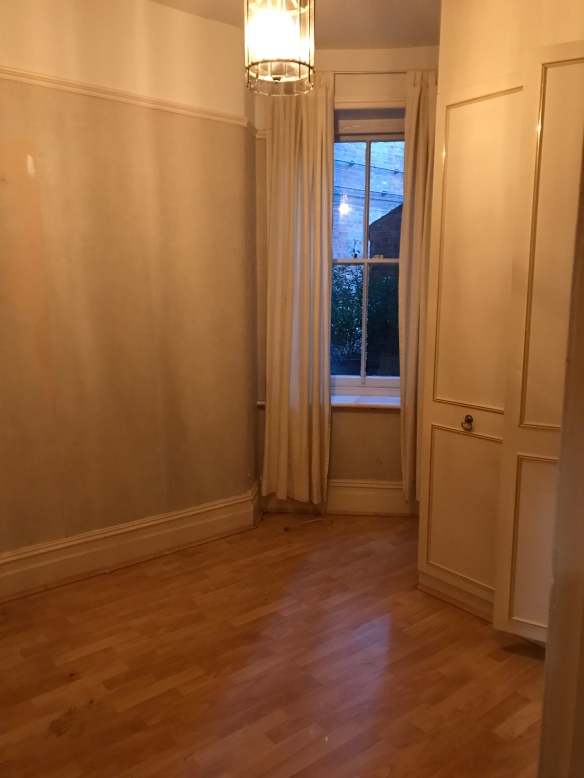 I have assembled the bed and made it up with clean (albeit slightly dusty) bedding, all ready for our inaugural guest arriving from Australia. Lucky it’s my brother who, as an architect, surely must have lived in worse conditions than these! Who needs a kitchen anyway?!

This evening I installed a blind. It looked brilliant, the perfect colour and a rather good installation, or so I thought. All went well until I tried to roll it down with the chain, and nothing happened. And then the chain snapped.

I decided enough was enough and ignored it for the rest of the evening. Plenty of time to find a solution or claim it’s purely decorative!

And it turned out that by reading the instructions, all was well and the blind was working perfectly. Who would have thought?!