I cycled home last night to find the large grey box we’ve been living under for the past seven months had finally been removed. Left behind was a platform and scaffolding.

From the 29th of March to the 25th of October, from the beginning…

It was what I’d always thought was being installed and I felt quite emotional as the trauma of the installation came flooding back.

Ok, no one died and all it meant was that we lived in darkness for seven months but we’ll never get the summer of 2019 back.

Anyway, onward and upward like moles blinking in the sunshine, if there was some!

We’ll be celebrating this weekend as the rest of the scaffolding is down today, just as the clocks go back for winter!

There’s a good lesson learned, don’t ever agree to scaffolding just to be amenable and always, always define the meaning of “platform”!

Yesterday I broke the news to Big T that it would probably take us another six months to get things finished. And that’s if we don’t run out of money.

It’s hard to explain why it’s taking us so long except that really we only started work in September. It took eight months to get approval to take the wall down.

Before we have a kitchen, we need to do the plumbing, electrics, move the boiler, replace the French doors, plaster the walls and install a floor.

And so it won’t be before Christmas and we’ll be lucky to get it done by Big T’s birthday in early February.

Better to be realistic!

It was the end of the road, the deal was done and we took to the streets with a million other Londoners to register our disapproval. This was not democracy.

It was a brilliant day with an endless stream of people walking along Piccadilly, flags waving and placards in hand. Never had so many white, middle class people been seen in one place!

It was quite emotional as people united in thought and voice and I felt proud to be part of it.

We didn’t march the route but walked through the back streets to Westminster Abbey and the Houses of Parliament stopping for a beverage along the way as protesting is thirsty work!

It started to rain (of course) and Agnes (Welsh Terriers against Brexit) became the star of the show as she jumped in the rain and being a total show off, loved the attention. We’ll have to see if any of the videos have gone viral! 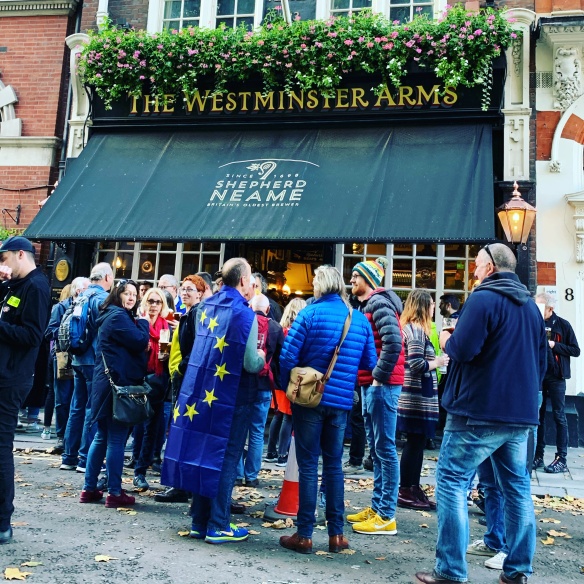 The crowd cheered as the amendment to delay passed and so it would seem it wasn’t the final say after all.

I shook my finger as Boris Johnson passed in his Land Rover. Shame on him.

And so we walked home to enjoy another day (or year) of Brexit madness.

Just another day in London.

Finally, finally we have progress.

The wall is down and the steel is in, albeit it’s all a bit precarious as there are many supports holding up Cashworth Mansions.

We have a handy cement mixer and lots of holes in the floor.

The room itself though feels enormous and hopefully we’ll now start to make progress towards a kitchen as food has become a daily challenge.

It’s been a tough couple of weeks as we soldier on through torrential rain, dust and construction.

These may seem like small accomplishments but to us, they’re massive.

Next stage is tiling so let’s hope things get finished in the next couple of weeks (or months!)

On Saturday we had a lesson in lighting as we ventured over to Chelsea to John Cullen, a lighting specialist.

It was illuminating in many more ways than one as we learned about a variety of lighting options for bathrooms and kitchens and suddenly understood the difference lighting can make to a space.

Of course it all comes at a price and our next step will be to try and find similar products for less money but what a difference it will make if we do it right.

This week I have become the squeaky wheel.

Having noticed that the bathroom demolition began in late August (thank goodness for dates on photos) I alerted the builder to the fact that we were over five weeks without a shower and we needed to pick up the pace.

That resulted in another chap arriving for a day and the installation of our new toilet. See, it wasn’t that hard! Squeak squeak.

It’s a very nice toilet and we were rather pathetically pleased with it. I suspect we’d be pleased with a toilet roll holder at this point.

Unfortunately the extra chap vanished after a day having done his back in and we were back to slow progress for the rest of the week. More squeaking required.

We’ve now been promised three chaps and a rubbish clear out this week as living conditions have deteriorated due to old pipes, rubble sacks, radiators and a large Japanese toilet cluttering up the hall and kitchen.

I’ve also mentioned the original schedule of kitchen installation by Christmas so let’s see how much squeaking is required to get that moving!

Popular with builders? Not so much!